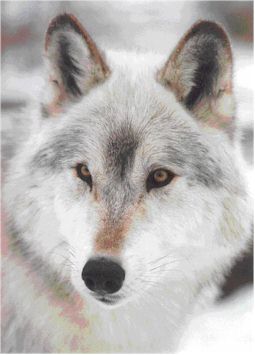 I have always dreamed of going to America and interacting with a real, live wolf. My dream came true in October 1998, when I participated in a Wolf Behaviour Seminar at Wolf Park, Indiana, United States of America. On this lovely October day, the sun was setting in the western sky at Wolf Park, when Pat Goodman – Wolf Behaviour Specialist – and I walked between the very spacious wolf pens, towards the pen of the disabled wolf. The idea of such a wolf spurred me on to see for myself how this was possible. Pat offered to introduce me to the wolf at his feeding time and so we carried the long, heavy Elk leg between us. As we approached the pen, I noticed a light beige-coloured wolf lying down on the green grass, which looked like a lush carpet underneath him. He was classified as a GRAY WOLF species, as are most wolves in Northern America. The wolf looked up and pricked his ears in a friendly manner, and the mouth showed a kind of grin as he recognised Pat. His beautiful amber eyes shifted to me and he lowered them again to our hands, still holding the heavy Elk leg. Pat looked at the wolf and said sweetly: "This is Orca our disabled wolf. What a moment in my life! Not only am I the first ever South African lady to come to Wolf Park, but I’m standing a few centimeters away from the most magnificent creature I have ever seen. I remember saying "hello" to Orca and telling him softly "how good a wolf he was" for not grabbing the Elk leg. He had no competition for his evening meal, so Orca waited patiently until Pat pushed the enormous leg through the door of his pen. He took the leg like an alpha male was expected to do – calmly in his strong mouth and moved to a corner further away, to enjoy his evening meal in private. Pat explained that Orca was the Alpha male until November 28, 1997. On that day he was in the countryside with the other wolves, doing wolf things. The students (who monitor the wolves’ behaviour and also interact with the wolves) came upon Orca lying in a sprawled sphinx rest, looking alert and composed. He did not stand up (being the alpha) and the other wolves were still submissive in his presence. It appeared as if all was well. When the wolves were to come in for their evening meal it was discovered that Orca was completely paralysed from the waist down. The Wolf Park staff had to act quickly to remove the paralysed Alpha before his pack could "figure out" what had happened to their leader. No-one knew how Orca had hurt himself. Dr Erich Klinghammer, the Director of Wolf Park, acquired the able assistance of a Chiropractor to come and assess the spinal injury of Orca. She found that the spine was not broken but seriously damaged. The next step was to find a willing physiotherapist to treat a wolf… They found a lady via the internet who was willing to come from Idaho to treat Orca - Carrie Cracock. She was to interact a short while with Orca until he was comfortable with her by rubbing and massaging him. It is not easy going for Carrie or Orca during the days that followed. Then the miracle happened in March 1998. Orca managed to stand (supported) for a few seconds on his feet. By July 7 he could stand a little longer and walk a step or two. Orca the miracle wolf was improving. After all the experienced treatment by Carrie, assisted by Pat and Monty, Orca’s circulation was boosted continuously and their just reward was given when he stood up, walking a few steps and then swimming in the lake. All the efforts by the dedicated persons involved were starting to pay off. Orca was still using vitamins B, E and Selenium, Peak 11 and Becozyme from Switzerland, some garlic to ward off flies and some Noni juice (which he likes frozen). Orca is feeling well enough to walk around and has now proven to be a terrific baby-sitter for the latest wolf pups from his sister Karin. 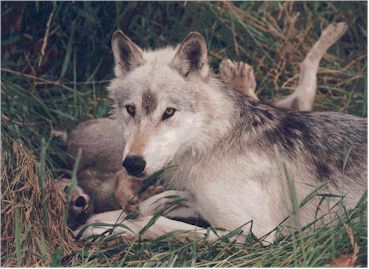 The pups have to interact with the mature wolves periodically. After being removed when 10 days old from the mother-wolf, they are being hand-reared by humans for a period of 4 months. Then the pups are returned to the pack, well socialised with humans. Dr Dave from Wolf Park declared in the latest medical report on Orca: July 1, 1999: "Orca’s condition, range of motion and control of his hindquarters is acceptable. This is very reassuring that although it seems ‘slow" the miracle wolf is still improving from being disabled to the miracle". In the meantime, during the summer of 1999, at Wolf Park, Orca had several experiences that will lead him in becoming a public relations wolf. That means, getting a lot more attention from visitors including children older than 7 years, which was not the case before. He will still be monitored constantly. Orca through all his treatment, and having to trust his handlers and therapists, has reminded me that love and trust are important pillars in life today, that without it, we are much poorer. He trusted his handlers completely and because of it, he improved his condition by his willingness to do what the humans required of him. Returning to South Africa after my course brought back the great disappointing reality that there are no wolves in our country – not like in America anyway. The closest relative in South Africa to the wolf is the African Wild Dog or Painted Dog. I became very concerned when reading old newspaper advertisements when I came across an advert that mentioned the sale of wolf-cross pups being sold in a town in South Africa. From the newspaper articles and advertisements it became obvious that we seem to have wolves in South Africa. But unfortunately they are not in packs in the snow of America; they live with human families! Although many rumours abound, I feel that it is a sad day to realise that at some stage, someone brought GRAY WOLF pups or young grown wolves into this country. This means that in all the larger centres of South Africa a real wolf may be found. These are unfortunately not rumours, as the owners have written articles for newspapers and magazines on their hybrids, too. It must be realised that a wolf is not a pet, it was created by God to live in the wild, (which excludes South Africa). They seem to belong where ice and snow can be a regular feature. They are highly socialised with their own kind, where rank order is strictly adhered to. Anyone owning a wolf or wolf hybrid, must know that he will be lonely unless he is with his own kind. My experience at Wolf Park and my knowledge acquired through the Wolf Behaviour Course forces me to urge people not encourage in any way, the keeping of wolves as domestic pets or to breed them to domestic dogs. Wolf Park is adamant about this, too. Any person who wants to know more about CANIS LUPUS the wolf, may contact me by e-mail = canusorca@hotmail.com or telephone 012-460 2312. Wolf Park can be reached at their website – http://www.wolfpark.org . My webpage can be found at www.wolfpark.org/sophie/orca.html. Written by Sophie Coetzee – the Wolf Lady 012-460 1312 17/1/2000